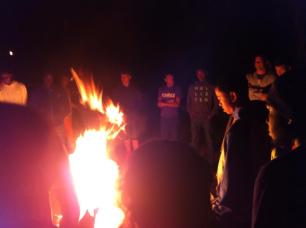 Early in my career as a teen professional I was told of the perils of lock-Ins. How there was all downside and no upside to letting teens stay all night at an event. I am thankful that I flatly ignored this advice because if I hadn’t I would have missed out on two things. First the amazing times Bronwyn and I have had hosting them either at the YMCA or churches or at host houses for some Disciple Now events. I can tell you from years of experience that something amazing happens at 4 o’clock in the morning when everyone is just fighting to see the sun come up so they can say they stayed up all night. Defenses are down and everyone gets goofy but also honest.  Some of the realest conversations I have ever had with teen groups have happened in these unstructured morning times. The second thing I would have missed is the relationship building that happens at lock-ins among all of the participants as well as with us and them. I don’t think it’s any coincidence that the teens I am closest too are the ones that have been at lock-ins with us. Bronwyn and I have a 1 to 7 theory that the time spent overnight like this is 7 times as impactful as time spent anywhere else. So one hour becomes seven and an entire night is like a week. Therefor I am a huge proponent of lock-ins.

Now I will be the first to admit that I am built for this, I can go all night without sleep and still function just fine the next day. I do eventually have to crash and I have found the older I have gotten the longer I need to recover but staying up all night is still no problem. I am also fortunate that I am married to someone who can more or less do the same so it does give us an advantage. I’ll also add that I don’t let just anyone come to a lock-in, these are not outreach events but are designed and programmed, yes they should be programmed, for those teens you already have a relationship with. I have kicked people out of lock-ins or not allowed them to come even at the last minute because there has to be a certain expectation met. These events like many others are a privilege that has to be earned not a right. And lastly I have had some unfortunate incidents happen, not many but some. However ultimately the upside has always far outweighed the potential for downside. For example that picture is from our annual New Years Eve Lock-in and every year just before midnight we have a bon fire and let them write down something about the previous year that they want to change or forget and one by one quietly they walk out into the cold and throw their scrap of paper into the fire. It’s always reverent and touching and I would love to post examples of what is written but it’s between them and God.

One of the things that drew me to BlueSky was the fact that they do lock-ins outside of just camp. You have no idea how happy this made me because it meant I didn’t have to go convincing everyone why I thought they were a good idea. Lock-Ins are messy, exhausting, at times bewildering even but I don’t think I would ever trade one moment I spent doing them because ultimately they are amazing and probably a little closer to what I think heaven will be like than our normal boring day to day lives on this side of eternity.