Being a camp counselor is the most amazing, impactful, fun, and exhausting job you can have in the summer.  It’s a chance to be silly, goofy, and utterly ridiculous by dressing up in costumes (mostly made from things you find around camp), singing crazy songs and shouting chants (being the loudest cabin is an understood competition), playing games that are sometimes messy that you would never play anywhere else. All while quickly making some of the best friends of your life with fellow counselors while being looked up to by (and often imitated by) your campers because you have just made being silly, goofy, and utterly ridiculous cool!

When going through our stuff preparing to move to Kenya, I came across some pictures of my time as a resident camp counselor.  I wish I had more because there was much ridiculousness that was not caught on camera (or maybe that is a good thing) since it was sadly before everyone was able to easily carry a phone around in their pocket.  Also, shaving cream fights and mud hikes are not camera friendly.  I did come across photos from our “Olympics”.  Your cabin group got to choose a country to be and we were Tanzania.  Now, we didn’t really know anything about Tanzania but it was fun to say and more creative than just being France or Germany.  Plus, Brett’s cabin group had been Tanzania the last two summers.  If you had told my ridiculous camp counselor self that one day I would be living and running a camp next door to Tanzania, I would have said you had had one too many pillow fights with your elementary campers or that the need for a week of rest and sleep was starting to get to you. 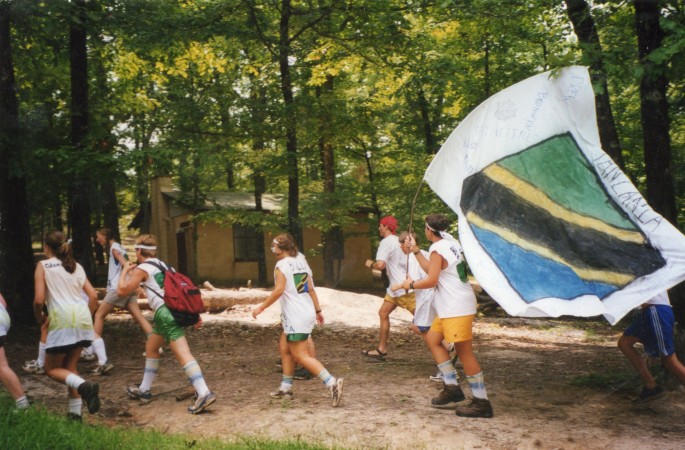 As we are interviewing college students to come be camp counselors this coming summer, I get excited to hear about their desire to share the love of Christ with campers and their passion to be role models and have a lasting impact.  However, most of them have no idea the impact that being silly, goofy, and utterly ridiculous is going to have on them as well!  We can’t wait to sit back (not that you get to really sit at camp) and watch God work in and through our 2018 Camp BlueSky Counselors!

Please keep these counselors in your prayers as they are also having to raise their support for the summer and send anyone interested in being a part of this amazing team of guys and girls our way!