I am calling this post “Driving in Kenya Part 1” because I am still quite the novice seeing as how I have only driven a few places and mostly in our neighborhood, but I can give you at least a glimpse of how it is going so far. As you may already know they do drive on the left side of the road here because at one time Kenya was part of the British Empire. I suppose I can’t complain too much about that because it is also the reason most everyone speaks English. My first time driving happened pretty quickly, Jennifer Watson who is the Area Director/East Africa and Bronwyn and I were heading to one of the schools we work with that is near our house and she asked if I wanted to follow. I said sure and off we went. This was mid morning so we knew the streets would be fairly empty, and it wasn’t really that far, I got the keys and the first thing I did was go to the wrong side of the car. Not off to the best start but not surprising because almost everytime I go to get in the passenger side of the car to ride with someone I go to the wrong side.

So I get in and back up no problem, it honestly doesn’t even feel that strange, the guard opens the gate and we drive out, Bronwyn in the passenger seat and us following Jennifer. So here is what is what I leaned pretty quickly, it really doesn’t feel that strange, your brain actually adjusts pretty quickly. At first the hardest part is judging how far you are from the left side of the road. I kept asking Bronwyn how much room I had and her reply was always “plenty”. It felt like I was in the ditch but I would scoot over and find that I did indeed have plenty of room. I think I kind of remember that same thing when I was first learning to drive, of course I was about 9 years old and it was in my grandfathers farm truck. However, the roads here in places are somewhat similar to the ones I first drove on in rural Mississippi. The turn signal and windshield wipers are on opposite sides so instead of signally left or right before I turned, I waved with the wipers instead.

After stopping at a few guard posts, I made it to the school without much incident. Bronwyn did instinctively put the car in park with her right hand after I pulled into the parking space. I even did my first roundabout. Nairobi doesn’t have any stop signs except the ones on guard gates and the idea of stop lights is a very new one so they are often ignored and you just kind of go. I received three excellent pieces of advice from other missionaries that seems to have helped tremendously.

I was feeling pretty good about my driving and we had dinner plans with some other BlueSky team members and I felt confident to drive to their house. It was really fine, the only new hurtle was that it was at 5:30 and people were getting off work and that meant lots of pedestrian traffic. There aren’t many sidewalks so there were people everywhere. Some of them would get out of the way while others absolutely would not. This was only truly harrowing the one time when I had a group of people walking on my left, a truck coming at me on the right and a motorcycle behind me that decided it was totally fine to pass right then. It was fine, I gripped the steering wheel a little tight but it was fine. Finally after dinner it was time to drive home, it was dark and I was a little cautious (read this as nervous) It might be a little while before I decide to drive at night again. There really aren’t many street lights and you don’t realize how much you miss the street reflectors until they are gone. But we got home and I have much more confidence now. As those of you praying for us know it was something I had asked for a lot of prayer about but ultimately it’s like anything new, you practice and you get better, you learn from your mistakes and finally you forget that it was ever a thing you had to learn. 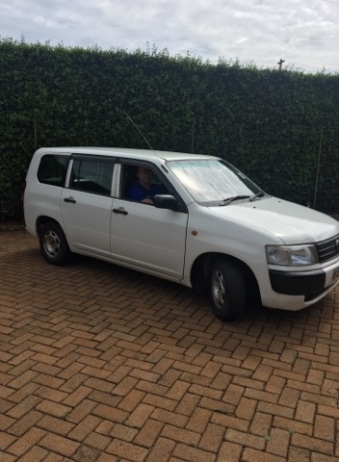 This isn’t the car we will be driving but I was told it was a good one to practice on. 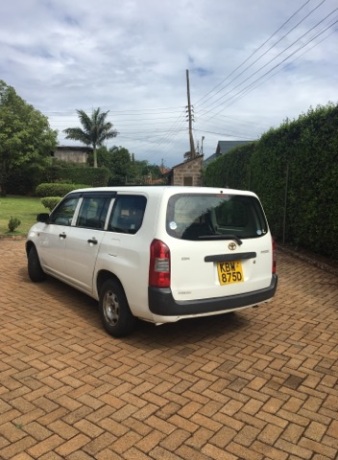 It’s a Probox in case you were wondering

Continue praying for us, this week we are jumping into lots of new things and I’m interviewing more camp staff both here and back in the States.

One thought on “Driving in Kenya Part 1”